Even though it is the name of the 2011 film, the phrase “attack the block” could also describe the process of selling off and the regeneration of land and neighbourhoods in London. More precisely, the trend in recent years has been for local authorities to sell housing estates to private developers in order to facilitate large scale renewal of housing stock and the regeneration of neighbourhoods. One justification that councils have offered in making the case for renewal has been that due to the state of disrepair and the social issues presented by such conditions, it is beyond the financial means of councils to refurbish and upgrade the existing housing stock. It is no secret that most sites earmarked for sale are regarded as prime real estate. Enter the property developers who have the resources to purchase and redevelop the valuable land — value that is defined within a paradigm of exchange value rather than use value.
Whilst, of course, the financial burden is passed on to the property developers, and local authorities promise new social and council housing paid for by the proceeds of the land sale, the proposed benefits also have profound consequences. These are starkest for the current residents of any site. For example, the Heygate Estate in Elephant and Castle — one of the locations in Attack the Block — tenants in social rented accommodation were dispersed across London, and sometimes beyond, to other council housing. Those who owned the leasehold to their properties were offered amounts under compulsory purchase orders that did not allow them to buy a comparative property locally. Those in one bedroom properties were offered an average of £95,480; the cheapest one bedroom flat in the planned Lend Lease development was to cost in excess of £300,000.[1]

The individual and collective social cost to the breaking up of such communities, then, is irreversible separation, as one community is dispersed across a very large city. One of the local campaigns, 35% Elephant, shows the mapped displacement of the former tenants and leaseholders, as depicted in the following images.[2] 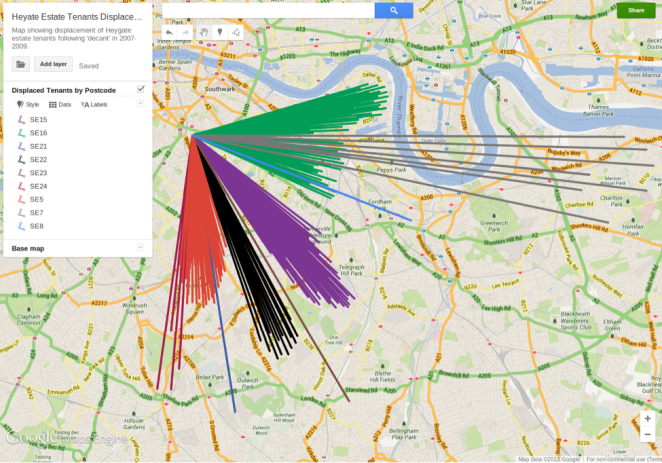 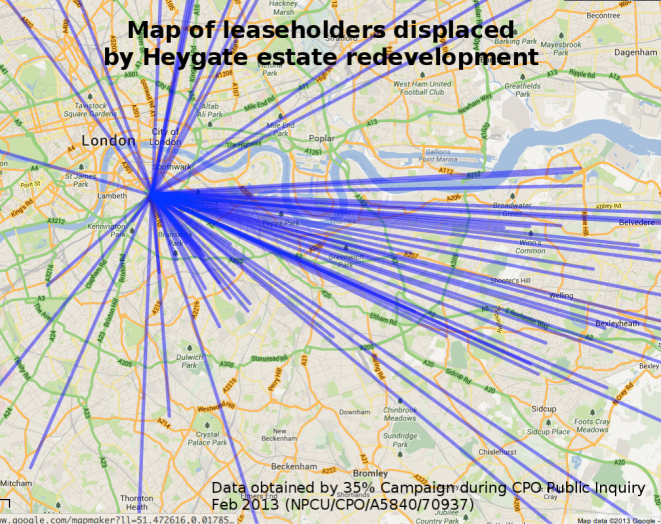